Video links for Chapter 1 of No Longer Newsworthy – “Trump, Carrier, and the Invisible Worker”

June 16, 2015: In his candidacy announcement at the Trump Tower on June 16, 2015 in New York, Trump said “I will be the greatest jobs president that God ever created,” a claim he repeated several times through the campaign

February 10, 2016: The drama of the Carrier plant closing started with a viral video. A mobile phone video from one of the workers attending Carrier’s Feb. 10 announcement soon gained more than four million social media views and was picked up by several news media organizations.

November 30, 2016: CNN anchor Christine Romans, reporting on Trump’s tweet and his coming appearance, said that “terms of the Carrier deal were not released, but there are already questions and critics.” Yet that didn’t prevent her from immediately concluding with “what is clear: this was a negotiation, this is a big win for Donald Trump. He is making good on his promise to stop companies from shipping jobs overseas.”

November 30, 2016: Anticipating the good news of Trump’s announcement the next day, Fox News anchor Megyn Kelly interviewed two white, male Carrier workers, Paul Roell, a seventeen-year employee and team leader, and T. J. Bray, a fourteen-year employee who had appeared in the November 14 NBC report. She asked the question that the Fox News organization wanted to highlight: as Carrier workers (it’s not necessary for Kelly to say the obvious adjectives: white, male), are they Trump supporters or not?

December 1, 2016: Kristen Welker, in a report for the Today Show, optimistically previews Trump’s visit to the Carrier plant.

December 1, 2016: Early in the morning on Dec. 1, before Trump’s announcement at Carrier, Fox & Friends host Steve Doocy interviewed another white male, Rick Link, a fifteen-year Carrier employee, to drive home the point that Trump is indeed the ascendant blue-collar president, leading the white working class into the Republican fold. Link’s interview was perfect fodder for Fox: so good, in fact, that he was back on with Doocy the next morning.

December 1, 2016: Another story about a white male worker who wants to thank Trump. Dean Reynolds of CBS interviewed Paul Roell and his wife.

December 1, 2016: ABC reports on Trump’s failure to save all of the jobs, but still characterizes this as “a real victory for Mr. Trump, even before he takes office.”

2008: Just for fun: Mike Pence with a very different view of an industrial bailout when Obama was doing it.

UNI Department of Communication and Media

Rural Iowa, from the air 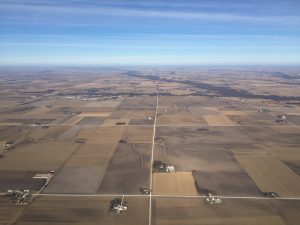